Things The Trackrabbits Did: That!

At the Annual Trackrabbit Track Meet on Saturday, February 23rd, Poly hosted a huge track meet at Veterans Memorial Stadium at Long Beach City College.
Poly’s annual Trackrabbit invitational brought out about 15-20 high schools from LA County to kick off the Track season. Schools such as Redondo Union and Citrus Valley came out to participate in this event.
The head of girls athletics, and head of track and field, Ms.Irving, gathered many volunteers to help make this track meet possible. The long distance, short distance, and fields really showed out throughout the meet.
According to Ab Tudayan, the long distance team, Long Distance Track Take Dubs at this annual event.
Long Distance Track (LDT) is composed to several people from the tree of running. Majority of runners come from cross country season with a few runners from mid-distance track joining the party.
Three events took place at the Track Rabbit Invitational which are the 4x1600m relays (1 mile), 4x800m relays (2 laps), and Distance medley relay races (DMR). Distance Medley Races are each runner in the relay run different distances, in order it is the 1200m, 400m, 800m, 1600m.
With dominating track runners from Wilson, Redondo Union, Milikan, Lakewood, Warren, and Citrus Valley High School, how did previous Poly boys and girls cross country runners fair in their new environment?
Starting off with the 4x1600m relays, Poly LDT varsity dominated in both girls and boys varsity taking first place in that category.The girls came in striking with there varsity 4×1600 with runners Sydney Carlson, Olivia Boyce, Laura Yontz, and Ailene Rios. They finished with an overall time of 23:40:68, an average of a 6:15 1600 meter run per runner.
The boys too replicated the girls success with runners Alex Matos, Danny Bautista, Aldo Kiev, and William Frankenfeld taking first in 4×1600 relays. The boys ran in a total time of 18:30:50 with an average of a 4:57 1600m. Boys dominated the field by gapping the following team Warren High School by 20 seconds. Both boys and girls runners received an blue Nike backpack for their performances.
Aldo Kiev one of the 4×1600 varsity boys runners voiced that it was, “an exhilarating start,” to the season and that, “(the invitational) reminded what runners across all levels should expect in future races.”
Ailene Rios the varsity 4x1600m runners states it was a, “phenomenal start,” to the season and is, “up and ready,” for the future races and events this semester. A good attitude to begin the new LDT season.
Although Poly’s LDT did not place 3rd or higher in any other events through all levels, it is a mere rough start to the season and expect them to be striking back March 1st at the Griffin Relay races.
As for the short distance, the varsity the star relay teams on both girls and boys won their sprint medley event. For the boys, :Kenyon Reed (senior), Anthony Johnson (junior), and Kejuan and Keon Markham (seniors), ran a 1:31:00. Their competitors had no chance against this dream team. The twins, Keon and Kejuan, remarked, “Hard work beats talent,” as they encourage the lower division athletes and future track runners.
As far as varsity sprints team for girls, they won first place in their 4 x 200m relay and placed second, losing to the Wilson Bruins, in the sprint medley. This team consisted of Saundria Martin (senior), Zanae Wood (freshman), Qween Okoh (senior), and Kenya Payne (senior).
The girls took another victory on varsity in the 4 x 400m with Saminah Haddad, Kenya Payne, Kennedy Butler, and Saundria Martin. Kenya Payne quotes, “hard work pays off and that’s all we do,” after the meet. 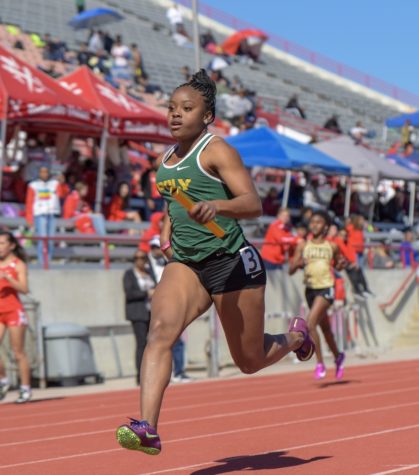