“She Kills Monsters” Killing it at the Poly Playhouse 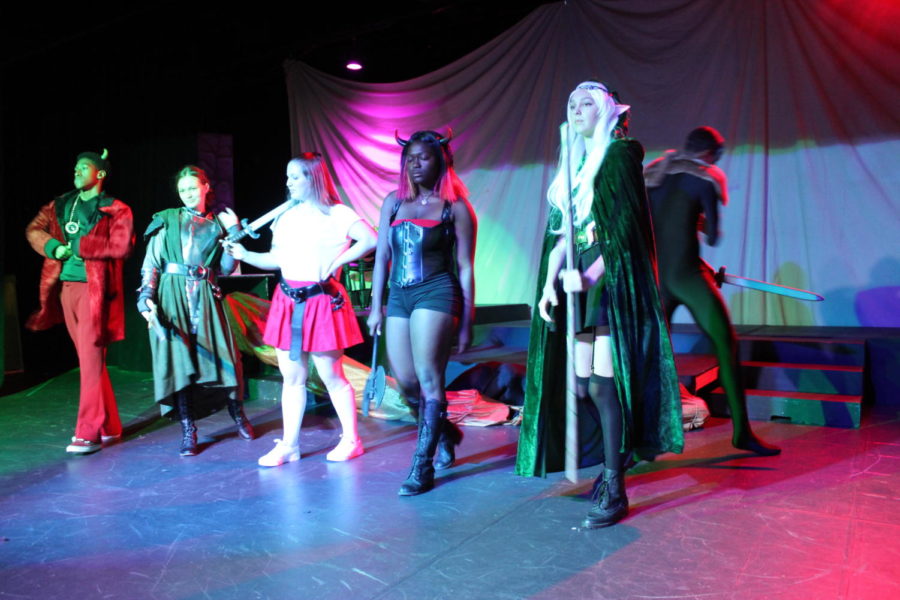 On November 14, 15, and 16 the Poly Playhouse presented their play “She Kills Monsters.” An action packed comedy which still managed to touch upon serious subjects, “She Kills Monsters” is a breath of fresh air amidst a stressful college season.
The play, put on by Mrs. Bon’s Play Production class, starred Gabby Kaiser as Agnes, an “average girl with an average face living an average life,” and Audrey Moor as Tilly, Agnes’ geeky little sister who died in a car crash and a renowned Dungeons and Dragons master.
Agnes and Tilly were never close while Tilly lived, both sisters being polar opposites and Agnes having a tendency to be ashamed of Tilly, a scenario which may be relatable to the audience. After her sister’s death, Agnes finds Tilly’s Dungeons and Dragons notebook, containing a game scenario she created.
Realizing there is much more about Tilly she does not know, Agnes seeks help from Chuck, a “dungeon master” who will lead her through a D&D journey in an attempt to understand the complex younger sister she never took the time to get to know.
Filled with cheerleading demon girls, an aggressive fairy, bugbears and a cube of slime which eerily talks like her boyfriend, Agnes is in for the time of her life as she explores the universe her sister has created and often found refuge in.
Once in the game, Agnes meet’s Tilly’s character, Tillius the Paladin, a mix between the side of her she never showed and what she aspired to be. Agnes discovers things she never knew about her sister such as her sexuality or her being bullied.
“She Kills Monsters” targets different audiences. Firstly and most obvious, to the geeks and nerds who are fans of the game and understand what it’s like to be Tilly. This play does not mock them or make them the butt end of a joke but rather, divulges into their lives and explores their sentiments under the surface.
But you do not have to be a D&D expert to enjoy the play, the premise is explained quite clearly, and remember, Agnes does not have any prior knowledge of the game so the audience can learn along with her.
But the play was not only relatable to a teen audience, adults could get a kick out of the endless 90’s pop culture references.
Overall, “She Kills Monsters” was beautifully executed play and made the audience laugh, think and cry at some point. The acting was phenomenal and the set design and costumes really transported the audience to a world of fantasy. “She Kills Monsters” was well worth seeing and my condolences to those who missed it.