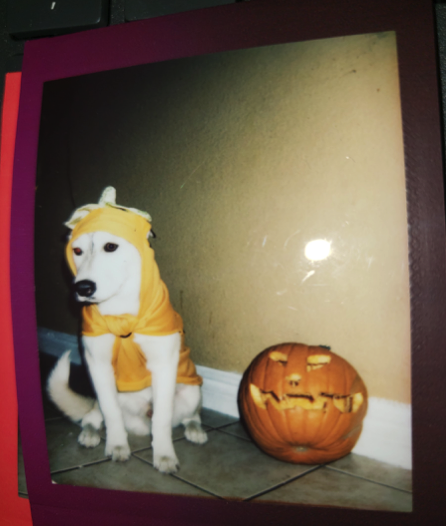 Zion is in the festive Halloween spirit.

This is Zion, my dog. The small dog is my sister’s dog, named King. We are going to talk about King first. We got King when he was two weeks old. My mom got him from my grampa for $50. We have had him for two years now. He´s really smart and we don´t have to put a leash on him. Also, we never trained King or Zion.

Zion is a really good dog. We got him when he was two months old. Zion was my brother’s dog at first. My brother’s name is James. He paid $400 for Zion he was supposed to pay 800, but my tia’s girlfriend was friends with the girl who sold Zion to us. James and I agreed that I would take care of Zion when he’s at work.

So I took care of Zion and my brother would come home and not give him any attention because he was tired and Zion would make a lot of mess, so my brother decided he wants to sell him and my mom was okay with it because she doesn’t want him. After all, he’s going to grow big but I told both of them no I’ll keep him since I take care of him more than my brother since he’s always working. My mom said no I can´t keep him but I begged her to let me keep him and she said okay.

Now Zion is seven months. He’s a husky mixed with a   german shepherd. Zion still makes a lot of mess. I walk him every day for like 30 minutes or less. I take him everywhere with me because my mom doesn´t want him in the house. Sometimes when I try to go somewhere I can´t because of him since my mom doesn´t want to babysit him, so I just stay home or try to figure out something.

Zion is an indoor dog because I live in an apartment and my neighbor has other dogs outside and they don´t want Zion close to their dog because he’s big so I try to take him out when I go somewhere.

Zion loves meeting new people and kids, he is so nice to them. One day we went to the dog beach and he lay down next to someone and tried to hug them – I got a little jealous.

Zion is my whole world, the only one who makes me happy. Also, dogs are better than people.